Kids Up Front, a valued partner 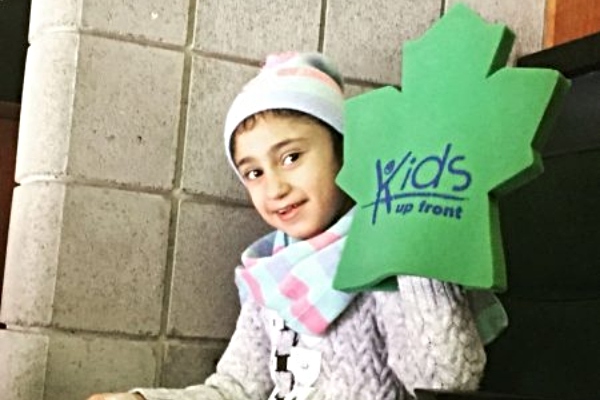 It’s Ottawa Senators game night and Sens fans are cheering for their team.

Somewhere in Ottawa, there is a young newcomer watching it on TV. He wishes he could attend that game but the ticket is too expensive.

That’s where Kids Up Front steps in. Whether it’s a seat at the Canadian Tire Centre for a hockey game or a seat for a theatre show, Kids Up Front’s vision is to create “a world in which all kids have access to enriching experiences.”

Kids Up Front is a registered charity that helps deserving children and families in the National Capital Region. They collect donated event tickets and offer them to children and youth who otherwise wouldn’t have the chance to attend that event.

Its motto is “one little ticket, one big lift.”

“We take an empty seat and give to a family to give them an experience that they wouldn’t have known about,” said Evan Patterson, Executive Director of the Kids Upfront Foundation in Ottawa.

Kids Up Front helps to promote a sense of community and has been a generous partner with the Catholic Centre for Immigrants. Many young newcomers have benefited and have attended a variety of Ottawa events thanks to Kids Up Front.

Evan believes the program is an important factor for newcomers to Canada to give them exposure to events in a new country.

“We want to immerse them in local culture and in the community,” he says. “It could be intimidating for them if they want to be a part of the community, but they don’t have the understanding and financial means to participate.”

Kids Up Front also partners up with other agencies, such as Big Brothers and Big Sisters, the YMCA and the Ottawa Chinese Community Services centre.

Kids Up Front supports CCI and other agencies by collecting tickets for events such as artistic productions and cultural experiences, acting as a hub for companies and individuals to donate their unused tickets.

“We simply want to welcome the newcomers to participate in community,” Evan says. “Our program is based on the capacity that our partnering agency can handle; for example, we cannot give 300 tickets to an agency that has 13 kids.”

Kids Up Front offers families an opportunity to escape from their daily challenges.

“Lots of our families are going through challenging times,” he said. “For two hours, if a kid can enjoy some quality time with friends and family,” that’s what Kids Up Front is about.

Kids Up Front is more than sports or theatre. We are a whole spectrum of events. We are a comprehensive and an inclusive program.” Recently, they had 14 tickets donated by Camp Fortune that included ski rentals and lunch for kids who went skiing in late March.

“It was more than a ticket,” Evan says. “It was a whole experience.”

Evan adds that the concept of providing tickets to special events is one that has resonated with the donors. “People often say, ‘what a good idea’. People see an intrinsic value of connecting people to events and they want to support us.”

Evan says such events are equally valuable to the venues and not just the community.

“Our mission is also about connecting agency partners and strengthening connections among mentors and those who participate in the events which strengthen bonds.”

Since Kids Up Front started its Ottawa chapter, it has collected and redistributed 16,000 tickets.