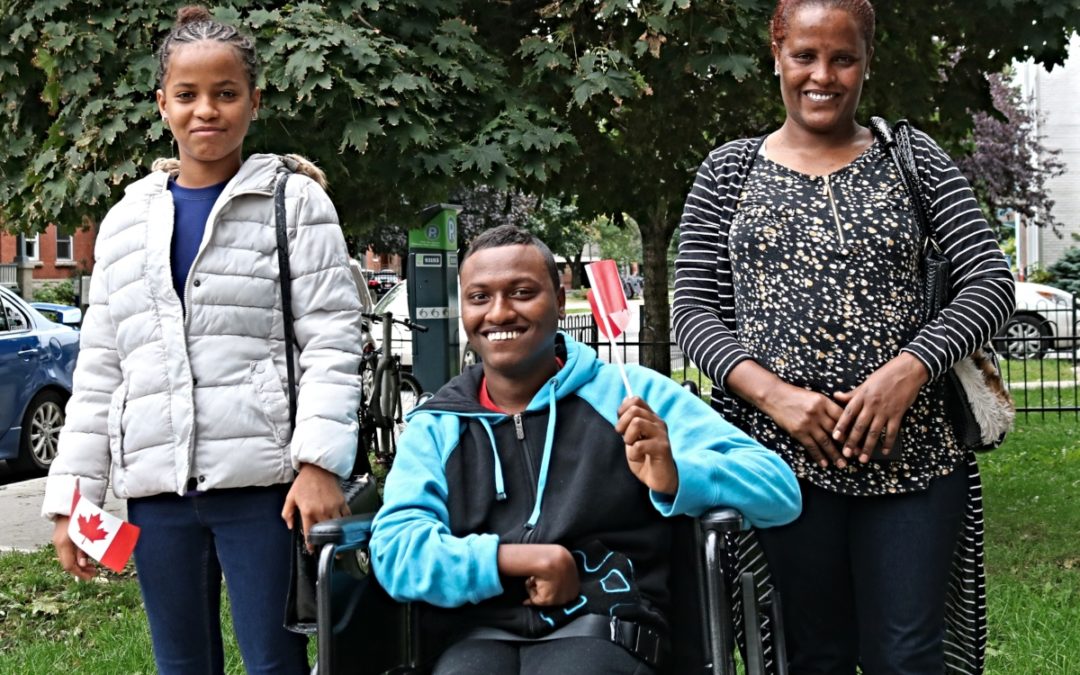 For Zemetu and her two children, this has been a year of miracles for the family.

Arsema was four and Ashenafi was seven when they fled Eritrea with their widowed mother and were forced to live in a refugee camp. Zemetu says life was a nightmare. “We lived in a small hut made of grass and mud. A fire anywhere in the camp was deadly as the smoke from the burning grass trapped people inside their homes.”

She couldn’t leave her children alone. Other children had disappeared from the lawless camp in the past and rumours were rampant that people were kidnapped for their organs. They were like prisoners, confined to the camp. Leaving the camp to find work or food was forbidden.

“Those eight years we lived there felt like a lifetime,” says Zemetu. Every day was a fight for survival. She rarely slept as she feared for her children’s safety. Arsema and Ashenafi never had the chance to go to school and rarely ventured from the yard of their hut. “I had nightmares living in that camp. All I wanted was to be safe and for my children to have a future.”

Life was more difficult for Ashenafi, who is in a wheelchair. He lost the use of his legs after contracting an illness at the age of two. But there was no wheelchair in the camp. Anywhere the family went, Zemetu had to carry her son on her back.

Money was scarce and never enough. Zemetu says she took a big risk by leaving her children occasionally in order to make money washing clothes. They finally got their chance to escape the camp thanks to the kindness of a doctor from the United Nations. UN officials regularly visited the camp but were not always allowed to speak to the refugees. But officials allowed the doctor to visit Zemetu and her children. After he discovered they had been in the camp for eight years, he vowed to help them.

When they arrived in Ottawa in March of 2018, we were there to meet them. They were happy and overwhelmed with emotions. Their first home was Reception House. There, we introduced them to life in Canada, helped them get their health cards, secured a wheelchair for Ashenafi and then helped them move into their first safe home.

A caseworker visits them regularly to help them adjust to daily activities such as opening a bank account, where to shop for food, find a family doctor, how to use public transit, and answer questions about life in Ottawa.

“We feel like we have been born again with these new lives in Canada,” says Zemetu.

When asked what Canada means to them, Zemetu breaks into a wide smile. “Safety. Nothing else matters right now. Just knowing my children are safe.”

Slowly, the family is discovering their new community. They like to shop at a nearby mall. Like a lot of teens, Arsema loves to be on the phone but is also interested in crafts. Ashenafi likes to look at books about cars and helicopters. Like all children, they love to watch cartoons.

The Catholic Centre for Immigrants has been with them every step of their journey. This year the children started school for the first time.

Zemetu says she wants to find a job and pay her own rent. She also wants Canadians to know there are so many other families waiting for their chance to come to Canada. She still thinks of the other families she left behind in the refugee camp.

“We got lucky because a doctor took kindness on us. But there are so many people like us who are waiting for the same opportunity.”