Joy of supporting a newcomer 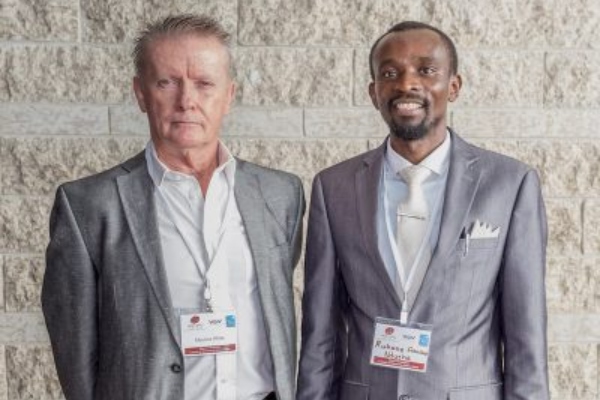 Ndusha, originally from the Democratic Republic of Congo (DRC), came to Ottawa as a Government Assisted Refugee (GAR) in the 2017. He had spent 10 long years as a refugee in Zambia and through the UNHCR and the Canadian government’s GAR program, finally found a country to truly call home.

“I felt relieved when I arrived in Canada,” remembers Ndusha. “As a refugee I didn’t have a sense of what tomorrow would be. When you are “stateless”, you don’t benefit from government services. Although you have some protection, in the back of your mind you always know that you can’t return to your country of origin.”

In Zambia he was a pastor. At the refugee camp where he lived, he also managed humanitarian projects through Beacon of Hope – Zambia, a non-profit organization which works to positively transform the lives of children and youth in the northwestern region of that country.

Ndusha remembers his long journey from Lusaka, Zambia to Ottawa. “Along the way I received amazing support from the Canadian government and the International Organization of Migration,” he remarks. “Everything was well organized to ensure my safety and security. I even had briefings with Canadian government officials in Zambia about Canadian culture and what to expect in my new homeland. Since arriving, I have discovered that Canadian society is very respectful of newcomers.”

He reminisces about the inspiring work he did in the DRC, working as a pastor with prisoners, providing them encouragement, food and other support. This work links him to Maurice White who retired in 2011 as a Parole Supervisor with Correctional Services Canada.

Just over a year ago, Ndusha was paired with Maurice, a volunteer with Catholic Centre for Immigrants’ Matching Program which provides one-on-one support to help newcomers adjust and integrate into life in Canada by introducing recent immigrants and refugees to established members of the Ottawa community.  “Since I was connected to Maurice, he has never ceased helping me in my integration process. In fact, he integrated me into his family.”

Maurice takes Ndusha to participate in recreational activities, visit museums and even to his home for dinner and for animated conversations, often about their cultures. “Exercise and recreation are important for newcomers to experience, in addition to work and studies,” says Maurice.

Becoming a volunteer linked to Ndusha was an eye opening experience for Maurice. “I read about DRC, which was a real education for me,” says Maurice. “This volunteer role gives me a chance to get to know someone who wants to integrate into our community.”

Maurice enjoys volunteering with the Catholic Centre for Immigrants’ (CCI) Skating Buddy Program, which offers newcomers a chance to learn to skate at the City Hall Rink of Dreams every Thursday during the winter months. “I have met a lot of refugees like Ndusha who have never been on skates before and it’s fun to see them progress and enjoy winter activities,” says Maurice. Ndusha often goes for a skate and he’s well equipped for the cold as he proudly shows off the scarf Maurice’s wife Barbara had knit for him.

In addition to recreational outings, Ndusha has also received practical support from Maurice, who connected him to Vanier Community Service Centre (VCSC). At the VCSC, Ndusha met an employment coach who helped him to find a job.  “I work at Millenium1Solutions as a customer services representative,” adds Ndusha. “My co-workers also treat me like family.” As he’s fluent in English, French and Swahili, he has also found part-time work as a health interpreter in hospitals through the Somerset West Community Health Centre’s Ottawa Language Access program.

His settlement counsellor at CCI also helped him deal with many of his practical needs, including housing.

Like many Canadians, Maurice was motivated to get involved when he saw the plight of the Syrian refugees. “I had lots of time on my hands, and thought I would be a good fit with the Matching Program,” explains Maurice.

Ndusha smiles broadly and has an incredible amount of energy and motivation. “I started integrating right away through the immigration process,” he remarks. “When you are refugee, you live in uncertainty. Going to a safer country makes me feel so positive about my future. No one can come to my door to threaten me anymore.”

He will always remember the sense of pride when he received his permanent residency papers at the Ottawa airport. “To a refugee like me these papers mean a lot,” remarks Ndusha. “As a refugee in Zambia I needed special papers every time I wanted to travel a short distance outside the camp. I feel I have a sense of freedom and am now acknowledged as a global citizen.”

“From the first time I met Maurice, I felt like he was a close companion or parent,” concludes Ndusha. “He is like family to me and I feel as if we have known each other since my childhood, yet we only met here.”

By playing regularly with Maurice at municipal tennis courts, Ndusha’s game has vastly improved. “I told him you get better you need to practice, practice, practice,” chuckles Maurice. They head off for a quick game of tennis on a sunny Spring afternoon. Their bond is strong on and off the courts — and as a friend and mentor, Maurice continues to go to the baseline for him.